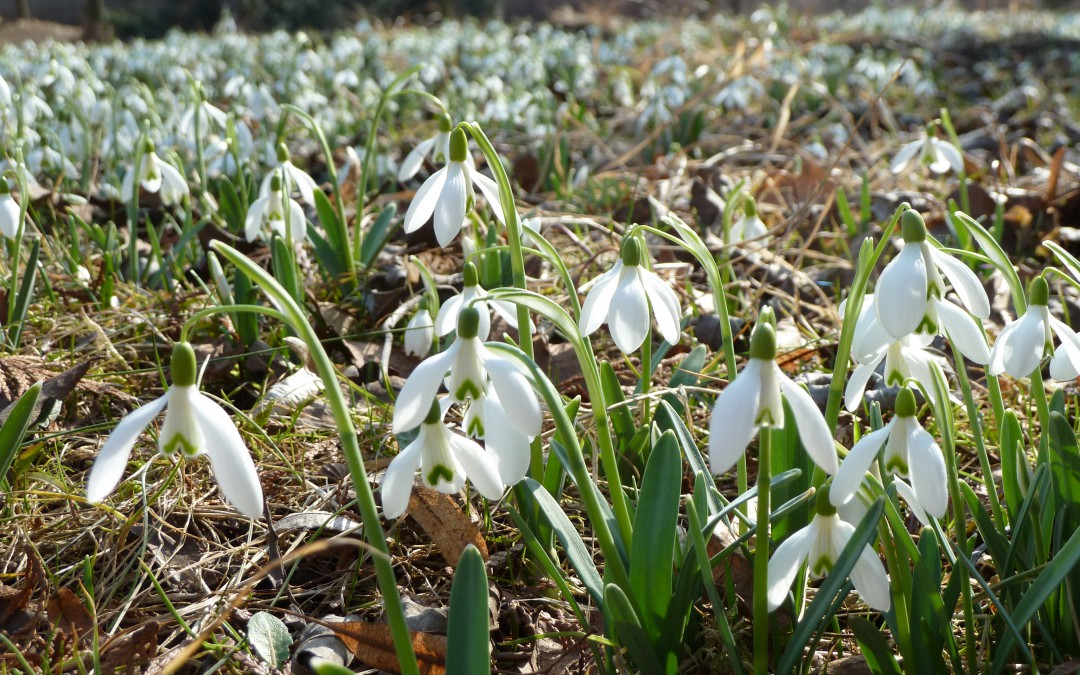 In my first garden in Zürich, I inherited a rather dull rose border, whose pruning had been neglected over the last few years. The true surprise came only a couple of months after I had taken over the garden: a superb dense carpet of crocuses and snowdrops was covering the area at their feet. I cannot think of a better combination to announce spring.

I am particularly fond of snowdrops, especially our native Galanthus nivalis. At the same time, I am not sure to fully understand the “galanthomania” that exists at this time of the year in the UK. On the one hand, hordes of visitors travel throughout the country to visit estates famous for their snowdrops collections. Moreover, certain are ready to pay tens and hundreds of pounds to acquire a single bulb of a rare specie or cultivar. The record so far is the auction in 2012 on eBay of one bulb of Galanthus woronowii ‘Elizabeth Harrison’ for 725£… On the other hand, one can argue that most species look alike; for a biologist, their foliage is the main feature that allows distinguishing them, but it is certainly not the reason to plant them in a garden. Moreover, different cultivars differ only by the placement or size of their petals and the presence or not of subtle markings. You should really have a very close look at them to spot these differences, whereas the main aim in a garden is to create a mass effect.

How can you establish such a carpet? Snowdrops multiply easily by the multiplication of their bulbs and less importantly by setting seeds. You only need to start with a couple of bulbs in favorable conditions and be patient. Furthermore, it is usually advised to move them in green just after flowering. This has the advantage of actually seeing what one is doing. This belief is mainly due to the fact that snowdrop bulbs do not store well dry over longer time periods, unlike daffodils and tulips. Bulbs sold dry in fall will most likely not establish well and should be avoided… unless you place your order in a respectable nursery that dispatches their orders only over a limited time period in summer and packages the bulbs so as to maintain a good level of humidity. Other specialists also deem that moving snowdrops in green does actually weaken the bulb. In conclusion, it is better to mark their position in spring and act later on during their dormancy period in summer.

The area under deciduous shrubs is the best place to plant them. Snowdrops are able to cover these otherwise bare patches and cope with the difficult shade and drought conditions that prevail once the shrub foliage has appeared. It indeed corresponds to their dormancy period. They can also ideally be planted with late appearing perennials, like hostas and Japanese anemones, for a successfully successional planting. It is truly a plant for every garden.