Would you be my Valentine? 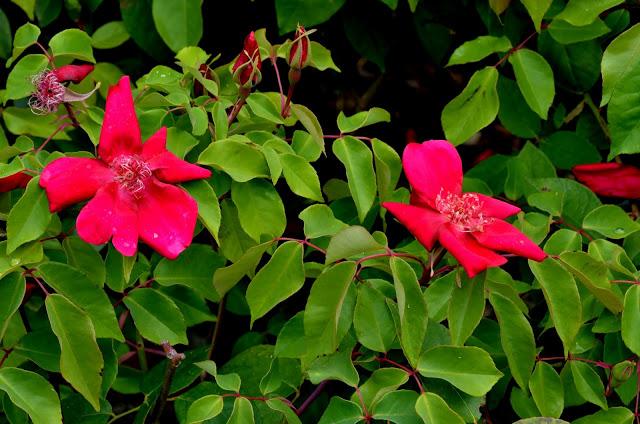 Certain will say I totally lack of romanticism but who got the idea of offering a rose at Valentine’s Day? This beautiful flower is the epitomical symbol of love but it has also a less acceptable hidden face: numerous scandals on its production conditions, disastrous ecologic balance to name just a few.

Why not instead offer a rose bush that will last more than the week of a cut flower? Now is the perfect time to plant bare-roots rose bushes. They are not only cheaper, they also transplant better compared to container-grown ones. Years of blooms to come, isn’t it a real promise of everlasting love?

The choice is immensely vast. A first criterion to limit it is the natural robustness of the plant. Many rose bushes suffer from one or more diseases: rust, mildew or the black spot disease. These diseases are per se not often fatal but the plant looses almost all its foliage in summer and presents a sad appearance. Certain will argue there is a whole panoply of chemical treatments available for the modern gardeners, but this goes against sustainability principles. Beyond this important consideration, why should we start with a frail plant sensitive to the every passing ailment and constantly worry about remedying it?

My first souvenir of a rose is a Rosa damascena in my grandmother’s garden. That has for a long time conditioned my image of an ideal rose: very double and highly scented. These characteristics are usually found in so-called ancient roses, like ‘Jacques Cartier’ or ‘Félicité et Perpétue’. However, most ancient roses have the disadvantage of flowering only once. English roses, like ‘Gertrude Jekyll’ or ‘Winchester Cathedral’ combine the look of ancient roses with characteristics of modern roses, notably the capacity to repeat flowering. Despite these desirable attributes, they dominate so much the rose trade – David Austin is by far the most important rosarian in England – up to the point they become a bit dull and I would not necessarily want to include them in a garden.

Today I am much more attracted by botanical roses, i.e., roses that exist in nature and have not been intensely bred by the hand of man. Moreover, these roses have much more to offer than their flowering: fabulous autumn color for Rosa virginiana or Rosa rugosa, hips covering the plant in winter or impressive needles for Rosa sericea var omeiensis.

Finally, if you insist on offering a red rose, I would recommend Rosa chinensis ‘Sanguinea’ that has deep red flowers during the whole season.