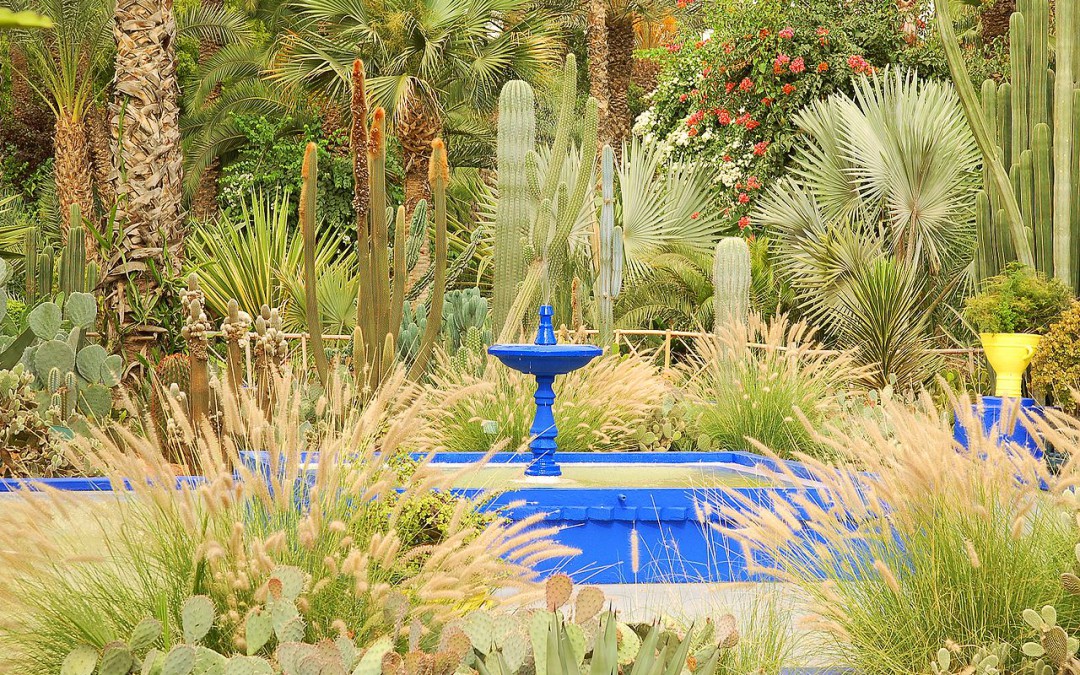 To take a break from the gloomy winter weather, I would like to invite you today for a travel to Marrakech, to discover the Majorelle Garden.

The French painter Jacques Majorelle created this garden in the 20’s and 30’s. Neglected after his death, the garden was acquired by Yves Saint-Laurent and Pierre Bergé in the 80’s. They set the ambitious goal to restore it to its former glory and open it to the public.

Ochre walls, like everywhere else in Marrakech, surround the garden and nothing from outside presumes of the show that awaits the visitor once inside. Entering by a small side-door, the visitor first arrives in a circular space that serves as an ideal buffer with the agitation of the street. The décor is subdued, only a small basin at the center and an elegant brick frieze on the upper part of the walls constitute it. The walk carries on through a forest of bamboos, which offers a welcome shadow in the summer time. Walking through it, songs of birds accompany the visitor, who gets a first glimpse at the other part of the garden and the house through the canes.

The house, like any hard landscaping elements, is painted in a saturated hue of yellow, orange or blue, the so-called Majorelle’s blue. The light in these latitudes considerably softens the violent hue of these colors, which would appear completely different with our Northern light. Thus, do not try to reproduce this at home. Moreover, these elements contrast nicely with the green of the plantings.

The latter are composed of a lush mixture of plants originated from the five continents, which creates an ideal image of an exotic garden, an idealized oasis in the middle of the desert. We notice both classics from Southern gardens – hedge of Punica granatum or bougainvillea impressive by their dimensions – that are combined with unusual plants. Here a small group of Bismarckia nobilis, there a collection of agaves, yuccas and cacti. The visitor is necessarily impressed by the botanical diversity, although this does not come at the price of ruining the overall composition of the garden. Furthermore, information is provided though discreet and ideally placed signs; it could not be better.

What is particularly striking in this garden is the omnipresence of water, in various forms: next to the house a canal forms a linear perspective, there a water lilies pond reminiscent of Monet’s in Giverny.

Finally, I was particularly touched by the alternation and diversity of spaces, avoiding the faux pas of an indigestible superposition of figures. Transitions between these different spaces are exemplary: the visitor slowly evolves from solar open spaces to sheltered and quiet ones, where, for a second, he gets the illusion he is the only one enjoying the garden. Everywhere, benches are skillfully placed, inviting the visitor to contemplate a particular view point and dream.