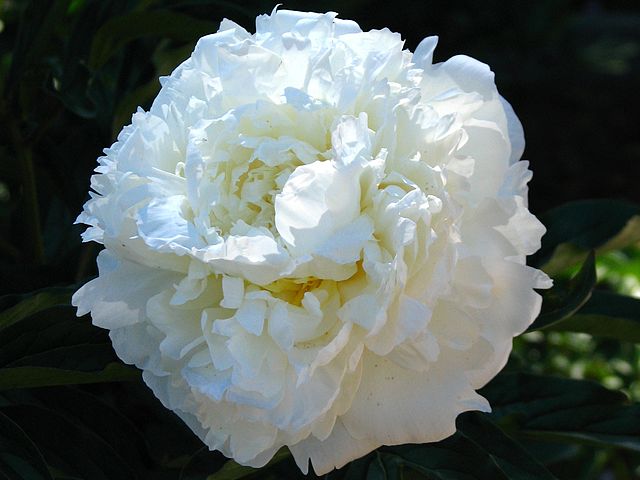 This year with the unusually hot spring, everything comes and goes at a fast pace: tulips are past their best, lilies of the valley and the first garden irises are in bloom… Soon is coming one of my favorite flowers: paeonies.

I find it hard to imagine a garden without them. I adore their foliage that stays beautiful throughout the season, their rounded flower buds that soon open to an explosion of petals in hues of white, pink and red as well as, for certain among them, a pleasant perfume with a hint of lemon. I usually prefer single bloom flowers, for their simplicity and subdued elegance, but peonies are a notable exception. Big is beautiful!

Planting a peony requires patience, as you need couple of years before the first bloom appears. You then better think twice about its position, in a rich, loamy soil in full sun or partial shade. The most important thing is to avoid planting it too deep, as this provokes a rotting of the plant. It could not be simpler though, you just have to plant it at the same depth as in the pot provided by your nursery. Furthermore, peonies are so long-lived that, in general, they survive the person who has planted them. That’s why they can usually be found in abandoned gardens, surviving among grass.

Specialists distinguish two groups of peonies, herbaceous and shrubby ones, Paeonia sufructicosa. To make things more complicated, a new group of hybrid was created couple of years ago. They are called Itoh’s intersectional hybrids and combine a woody stem from which an herbaceous part grows every year.

Our grandmothers’ peonies are usually Paeonia lactiflora, commonly called Chinese peonies. Their best place in the garden is in the vegetable and cut flower gardens. Hence, one does not hesitate to cut a couple of flowers for inside. It is absolutely necessary to stack them, especially the double flowered ones, and it is useless to act after a spring rain has ruined the display. The most natural solution is obtained by letting the plant grows through a mesh maintained at about 20cm above the soil with thin sticks. There are specific metallic devices found in garden center but I prefer to produce my own with woven hazelnut sticks. Within this group, I am particularly fond of those of Calot, obtained in the late nineteenth century, such as ‘Noémie Demay’, ‘Alice Crousse’, ‘Marie Lemoine’, or the immoderate ‘Triomphe de l’Exposition de Lille’.

In a border, I prefer to use botanical species. My favorite among all is certainly Paeonia delavayi. It has the nicest deeply cut foliage, combined with a single deep red bloom. I also like Paeonia mlokosiewiczi for its primrose single bloom, certainly a challenge to order by phone from your favorite nursery…