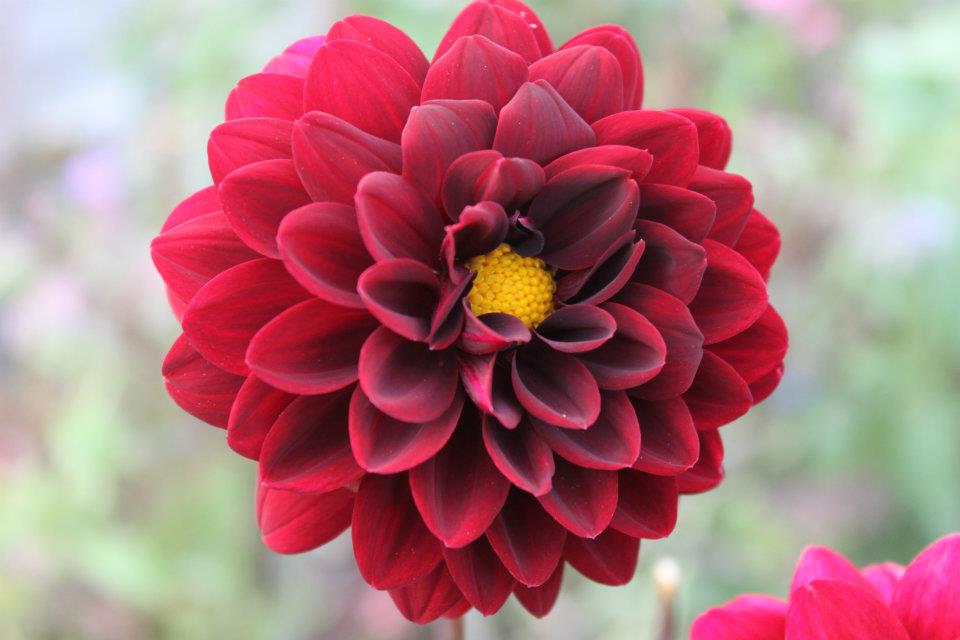 Dahlias are back. Once completely unfashionable, there were only certain nostalgic gardeners to carry on planting them. In the UK they were also deemed as working class flowers, hence rejected from any respectful garden. Dahlias were originally brought from South America to serve as human food, something I would not have thought of given the medical smell the tuber exudes. It were rather their ornamental attributes and their easiness to hybridize that have attracted gardener’s attention, up to the point where it had gone too far: monstrous double flowers, the necessity to stack them to prevent pathetic display after a heavy rain…

Dahlias have a lot to offer: a large palette of colors, with the notable exception of blue, a great diversity in shapes of flower and an interesting foliage for certain among them. One can plant them in borders, to bring late summer colors, but I prefer to mix them with vegetables in the vegetable garden, especially since one cannot avoid lifting tubers after the first frosts.

‘Bishop of Llandaff’ is archetypal of this renewed interest, as it combines many desirable qualities: a simple flower, a compact growth habit that does not require any stacking and most of all a superb fern-like deep purple foliage, which contrasts admirably with the crimson flowering. Since its inception, many others “Bishops” have been selected, e.g. ‘Bishop of Dover’, ‘Bishop of Oxford’, etc.

This regained interest also concerns botanical varieties. It is a bit like going back to the roots, before hybridization took place. I am fond of Dahlia coccinea, in particular Great Dixter’s orange cultivar I have decided to add this year in the garden. D. merckii is very impressive, with its 3m height and lilac simple flowers. However, I would not recommend it in Switzerland, it takes quite some time to develop and is hit by frost before flowers can appear.

I personally do not dismiss heirloom varieties either. Among my favorites, ‘Arabian Night’ of deep almost black red flowers or ‘David Howard’, a bright orange one with contrasting purple foliage. Pro Specie Rara, the foundation in charge of biodiversity conservation programs in Switzerland, lists both. I also adore ‘Ellen Huston’ for its nice color that blends orange and red.

With my collector inclination, I have found a mail order nursery that can satisfy all my wishes. The National Dahlia Collection in Cornwall offers an amazing and unique collection. It sends rooted cuttings, a lesser known and cheaper multiplication method than tuber division. After a year, each plant will have developed a tuber that can be stored in the cellar for next year. What about starting your own collection?